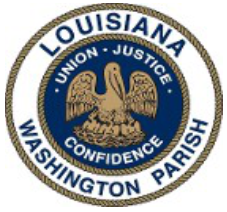 In his report (beginning 28:50 into video of the meeting), Parish President Richard Thomas