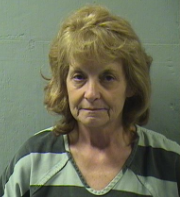 Virginia Marie Bays, the head clerk for the Village of Sun was arrested Friday (November 13, 2020) accused of theft and malfeasance in office by stealing more than $4,000 of village funds.

On August 15, 2020, Village of Sun Mayor William Talley discovered evidence of embezzlement from the village’s finances. The village conducted an internal investigation and reportedly determined that Bays (age 61) had systematically stolen approximately $4,705.95 worth of cash money from the village over the course of several months.  The money was generated as revenue from traffic citations paid by citizens, as well as revenue created from the village’s skating rink.

Mayor Talley filed a report with the St. Tammany Parish Sheriff’s Office and began working with detectives from the STPSO Financial Crimes Unit on the case. While being interviewed by detectives, Bays reportedly admitted to stealing the money and removing the hard copies of the citations from the office in an effort to conceal the theft.