Shortly after 3:00 a.m. Wednesday morning (October 7, 2020), Washington Parish Sheriff’s Office Deputy Jay Dupre responded to a report of a truck horn being blown consistently in the parking lot of a motel south of Bogalusa. As he arrived at the motel, he observed the suspect truck leaving the parking lot. He stopped the truck a short distance away and encountered a strong smell of marijuana coming from inside the vehicle.

When Deputy Dupre searched the driver, he discovered methamphetamine concealed in a pants pocket. A search of the vehicle revealed a quantity of suboxone and marijuana. A check of the driver’s criminal record indicated that his driver’s license had been suspended due to prior traffic offenses. 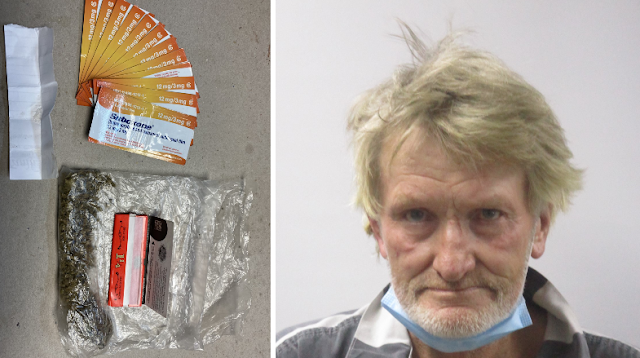 Robert C. Thompson, age 57 and a resident of Foresome Street in Abita Springs, was arrested and booked into the Washington Parish Jail on three counts of possession of illegal drugs and one count of driving under suspension.

“There really is no such thing as a simple complaint,” stated Sheriff Randy Seal. “What might seem trivial sometimes develops into a criminal offense. Who knows what might have occurred if our alert Deputy Dupre had not responded and then followed up. Good job, Jay!”