Disturbance 1. Tropical Storm Gamma is strengthening as it approaches the east coast of the Yucatan Peninsula. Maximum sustained winds is at 65 mph. It is moving toward the northwest, expected to turn to the north on Sunday, and then to the west or west-southwest on Sunday night or Monday.

Disturbance 2. A tropical wave over the eastern and central Caribbean Sea, with locally heavy rainfall and gusty winds is affecting portions of the ABC Islands, the Lesser Antilles, the Virgin Islands, Puerto Rico, and portions of the coasts of Colombia and Venezuela. A tropical depression could form next week while the system moves westward or west-northwestward across the central and western Caribbean Sea and then into the southern Gulf of Mexico. Formation chance through 48 hours is at 20% and formation chance through 5 days is at 50%.

Disturbance 4. An area of disorganized showers and thunderstorms over the central Atlantic more than 1000 miles east-southeast of Bermuda is associated with a surface trough of low pressure.  Some slow development of this system is possible during the next couple of days before it too encounters strong upper-level winds. Formation chance through 48 hours is at 10% and formation chance through 5 days is at 10%. 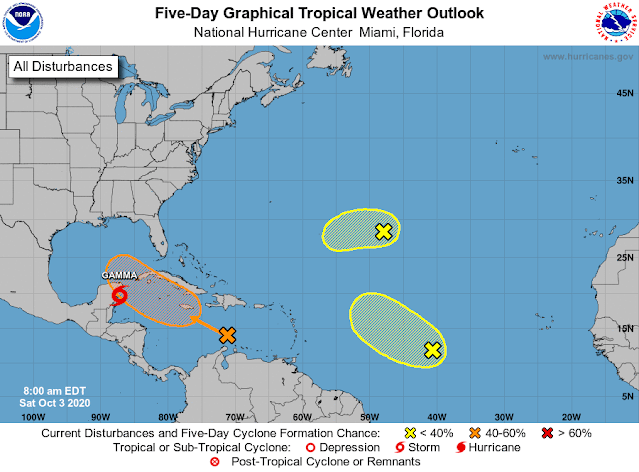