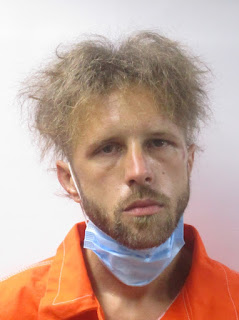 Last Friday (October 9, 2020), Washington Parish Sheriff’s Office Sergeant Mike Thomas responded to a report of a disturbance in a rural area southwest of Franklinton. Upon arriving at the residence, Sgt. Thomas discovered a male on the premises had entered the occupied house without permission by climbing through a window and had ransacked the house and destroyed property. Deputy Randall Garcia arrived to assist.

Wesley Bernard Williams, age 33 and a resident of Mike Fisher Road, was arrested and transported to the Washington Parish Jail charged with unauthorized entry into an inhabited dwelling, criminal damage to property, possession of drug paraphernalia and failure to appear in court. His bond was set at $3,550.

Williams has two previous arrests in Washington Parish. In June 2007, he was charged with unauthorized entry into an inhabited dwelling and in November 2010, he was arrested and charged with criminal trespass, simple battery and being a fugitive from Louisiana’s 23rd Judicial District Court.

“A prompt response from Sgt. Thomas and Deputy Garcia resulted in a quick arrest,” stated Sheriff Randy Seal. “We may never know what gave rise to the intruder’s decision to do what he did. We do know, however, the homeowner was protected and it is always our goal to protect victims of crime.”