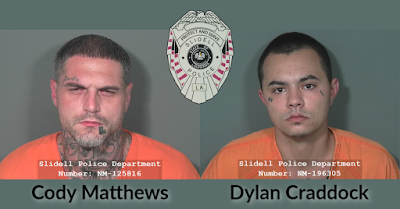 Two Slidell men have been arrested for attempted murder and kidnapping, after severely beating a man to near death.

In the early morning hours of Thursday, August 20th, a man was found severely injured in a remote area off Bayou Paquet Road, located in the unincorporated Slidell area. The man was stabbed and beaten to near death. Throughout the investigation, it was discovered the crime occurred at an apartment in the 1800 block of Fifth Street, located in the city limits of Slidell.

It is believed by Slidell Police Department that two Slidell men, 27-year-old, Dylan Craddock and 32-year-old, Cody Matthews, severely beat and stabbed the victim at the Fifth Street apartment, then took him to a remote area to dispose of his body. The victim survived, was able to seek help, and was transported to a hospital. The victim has since been released and is recovering from his injuries.

At the end of last week, both Craddock and Matthews were arrested for Attempted First Degree Murder and Second-Degree Kidnapping. Both were booked into the Slidell City Jail and have since been transported to the St. Tammany Parish Jail.

While investigating this case, it was discovered that an acquaintance of the victim, 25-year-old, Brooke Buchler, was missing from the same Fifth Street apartment, where the male victim was beaten several days earlier. On Sunday, August 24th, New Orleans Police contacted Slidell Police and stated they located Brooke Buchler deceased inside the abandoned Naval Support Activity complex in New Orleans. Buchler’s death has been classified as a homicide. NOPD is the lead agency for the murder investigation of Buchler. Slidell Police is working closely with NOPD to determine if the two cases are related.

Anyone with information on the murder of Brooke Buchler is asked to contact Crimestoppers at 504-822-1111 or the NOPD.