Disturbance 2. Tropical Storm Paulette is moving toward the west, changing west-northwest later today. Maximum sustained winds are at 60 mph but it is expected to gradually weaken on Thursday and Friday. No threat to the United States.

Disturbance 3. Tropical Depression Rene has maximum sustained winds at 35 mph and moving west-northwest. It is expected to reach Tropical storm strength later today and become a hurricane in a couple of days. No threat to the United States.

Disturbance 4. A tropical wave is forecast to emerge off the west coast of Africa on Thursday.  Gradual development is expected once the system moves over water, and a tropical depression is likely to form late this week or over the weekend while the system moves generally westward across the eastern tropical Atlantic. Formation chance through 48 is at 40% and formation chance through 5 days is at 80%. 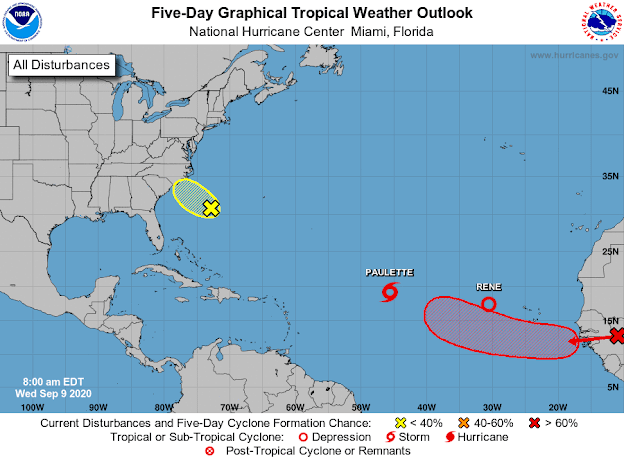