Disturbance 1. An area of low pressure is located about 300 miles west-southwest of Bermuda. Gradual additional development of this system is possible during the next two or three days and it could become a tropical depression while it moves slowly westward to west-northwestward. Interests along the southeast coast of the U.S. should monitor the progress of this disturbance. Formation chance through 48 hours is at 30% and formation chance through 5 days is at 40%.

Disturbance 2. Tropical Storm Paulette is moving toward the northwest near 6 mph and then should move west-northwestward Wednesday through Friday. Further strengthening is forecast during the next day or so and then weaken Thursday evening and Friday. There are no coastal watches or warnings in effect.

Disturbance 3. Tropical storm Rene is affecting the Cabo Verde Islands now as it moves west. Little change in strength is expected today, followed by gradual strengthening tonight and Thursday.  Rene is forecast to become a hurricane in a couple of days. It appears to be no threat to the United States.

Disturbance 4. A tropical wave is forecast to emerge off the west coast of Africa by Thursday. Gradual development is expected once the system moves over water, and a tropical depression is likely to form late this week or over the weekend while the system moves generally westward across the eastern tropical Atlantic. Formation chance through 48 hours is at 0% and formation chance through 5 days is at 70%. Threat to the United States is unknown at this time. 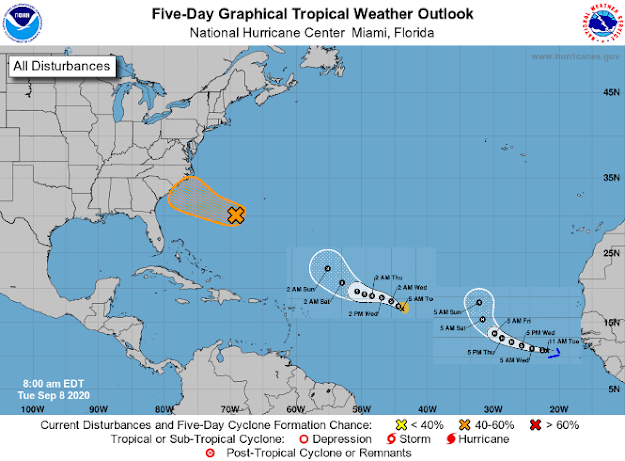