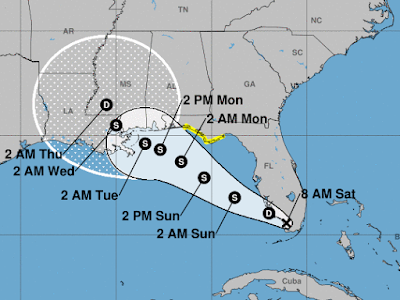 Disturbance 2. Tropical Depression Nineteen (pictured right) is near extreme southwest Florida and expected to become a tropical storm over the Gulf of Mexico later today or tonight. Maximum sustained winds are at 35 mph and strengthening is expected to near hurricane intensity by early next week. Dangerous impacts from storm surge, wind, and heavy rainfall will be possible along the gulf Coast from the Florida Panhandle to southeastern Louisiana late this weekend and early next week.

Disturbance 3. Tropical Storm Paulette is moving westward over the central Atlantic and forecast to bring hazardous conditions to Bermuda by Sunday night. Maximum sustained winds are at 70 mph. Both a Hurricane Watch and a Tropical Storm Warning are in effect for Bermuda. Swells generated by Paulette are affecting portions of the Leeward Islands and will continue to spread westward to portions of the Greater Antilles, Bahamas, Bermuda, and the southeastern United States this weekend.  These swells are likely to cause life-threatening surf and rip current conditions.

Disturbance 4. Tropical Storm Rene is no longer forecast to strengthen. Maximum sustained winds are at 40 mph. There are no coastal watches or warnings in effect.

Disturbance 5. A broad area of low pressure located several hundred miles southwest of the Cabo Verde Islands is forecast to develop into a tropical depression within the next couple of days while it moves westward across the eastern and central tropical Atlantic. Formation chance through 48 hours is at 80% and formation chance through 5 days is at 90%.

Disturbance 6. Another area of disturbed weather, associated with a tropical wave, is located near the Cabo Verde Islands. A tropical depression could form over the far eastern tropical Atlantic early next week while the system moves slowly westward. Formation chance through 48 hours is at 30% and formation chance through 5 days is at 60%. 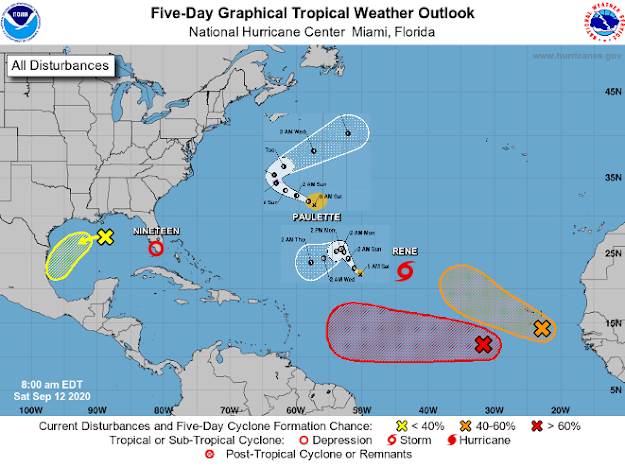