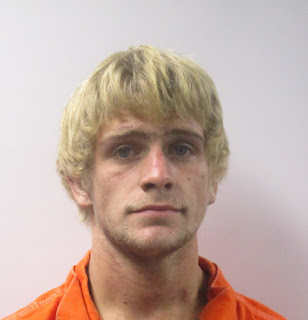 Yesterday (September 27, 2020), the Rayburn Correctional Center canine team captured a suspect who had fled from a Washington Parish Sheriff’s Office deputy near Lon Miley Road and Highway 21 north of Bogalusa.

WPSO Deputy Kyle Stogner was patrolling on Highway 21 when he noticed a driver committing traffic violations near Paige Road. The vehicle was stopped near Lon Miley Road, at which time the driver exited the vehicle and fled into nearby woods. The Rayburn canine team arrived to assist and began a search of the woods. Approximately three hours later, the canine team located the fleeing suspect and took him into custody.

The fleeing man was identified as Trenton Kyle Statham, age 21 and a resident of Highway 62. Deputy Stogner arrested Statham and transported him to the Washington Parish Jail where he was booked on charges of possession of marijuana, resisting an officer by flight, contempt of court, failure to appear in court and traffic offenses. On September 28, the 22nd Judicial District Magistrate Judge set Statham’s bond at $4,750.

“Young Mr. Statham is on a fast track to a lifetime of incarceration if he doesn’t mend his ways,” stated Sheriff Randy Seal. “I congratulate Deputy Stogner on a good arrest and I am so appreciative of the good assistance from the Rayburn canine team. These men and their canines are a wonderful asset not only to the Sheriff’s Office but also to all citizens of Washington Parish and surrounding areas.”