Disturbance 1. A tropical wave over the eastern Caribbean Sea is expected to gradually develop over the next day or so as it moves westward across the central Caribbean Sea.  After that time, the wave is forecast to move more slowly west-northwestward, and a tropical depression is likely to form late this week or this weekend when the system reaches the northwestern Caribbean Sea.  Formation chance through 48 hours is medium at 40% and formation chance through 5 days is high at 80%.

Disturbance 2. An area of low pressure, located a little over 1000 miles east of the Windward Islands is expected to develop into a tropical depression during the next day or two while the system moves west-northwestward across the central and western portions of the tropical Atlantic. Formation chance through 48 hours is high at 90% and formation chance through 5 days is also high at 90%.

Disturbance 3. A vigorous tropical wave is located over Guinea and Sierra-Leone, Africa. Environmental conditions are marginally conducive for some development but by early next week conditions are likely to be less favorable for tropical cyclone formation while it moves west-northwestward toward the central tropical Atlantic. Formation chance through 48 hours is at 0% and formation chance through 5 days is low at 20%. 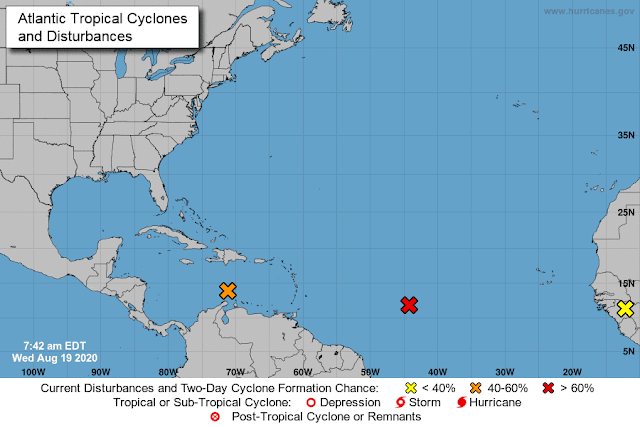