On Thursday morning (August 6, 2020), Officers assigned to the Bogalusa Police Department Criminal
Patrol Division responded to the 1300 block of Byrd Avenue in reference to shots fired.
During the course of the investigation, while searching a wooded area for the shooter, Officers discovered a marijuana grow consisting of 15 plants. A water hose was found with the plants, and it appeared they had been recently watered. Officers traced the hose back to a set of apartments on Byrd Avenue, and obtained a search warrant for the premises. While waiting for the search warrant to be signed, a subject exited the apartment, identified as Jaquan Brumfield. He was found to have active warrants from Bogalusa and New Orleans, and was placed under arrest. 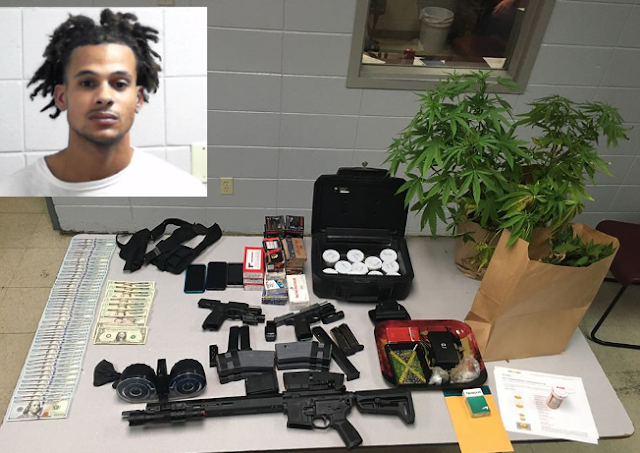 BPD Officers then executed the search warrant at Brumfield’s apartment. Inside the apartment Officers seized a .40 caliber handgun, a 9mm handgun, an AR 15 Rifle, ammunition, marijuana seeds, a small amount of marijuana, drug paraphernalia, and over $5,100 in U.S. Currency.
Brumfield reportedly admitted to firing the shots that led Officers to the area. Brumfield was charged with Illegal use of a Dangerous Weapon, Cultivation of Marijuana, Possession of Marijuana with intent to Distribute, Possession of Drug Paraphernalia, Possession of a Legend Drug, Illegal Carrying of a Weapon while in Possession of a Controlled Dangerous Substance, and Fugitive from an Outside Agency.
Brumfield was booked into the Bogalusa City Jail, and later transferred to the Parish Jail.
at 8/07/2020 04:46:00 PM