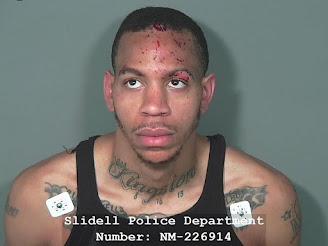 Rhodes, who was traveling to work his shift at a local cab company, was celebrating his last weekend at work before retiring on Monday. Slidell Police Chief Randy Fandal was both saddened and furious when he was notified about the death of Rhodes.

“Another senseless death at the hands of an impaired driver,” says Chief Fandal. “We’ve had multiple serious crashes recently due to impaired driving, including the student driver and instructor this past week. I have instructed our officers to increase traffic enforcement with ZERO TOLERANCE for impaired driving. We preach it over and over to get a ride from an Uber, Lyft, or a cab…and now, Mr. Rhodes, a cab driver, is dead because of a selfish person behind the wheel. Our thoughts and prayers go out to the Rhodes family. Be rest assured that justice will be served,” says Chief Fandal.

Lewis was arrested and charged with: Vehicular Homicide, Possession of a Schedule I Narcotic, Possession of Drug Paraphernalia, and Improper Lane Usage. Lewis was booked into the Slidell City Jail and later transported to the St. Tammany Parish Jail.