On June 3, 2020, the Franklinton Police Department had responded to an aggravated arson at a residence on Bene Street and located a fire that was quickly extinguished. Officers obtained video surveillance from the residence which provided images of two individuals pouring an accelerant and lighting a fire. The video was uploaded to FPD social media pages and with the public’s assistance, both individuals were identified - one juvenile and one adult.

The FPD press release states that the June 3, 2020 incident “is believed to be in retaliation for a homicide which occurred on June 1, 2020, where Paul Robinson was arrested.” Robinson was charged with second degree murder, resisting an officer, obstruction of justice, possession of marijuana, and possession of schedule II drugs. 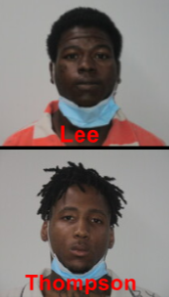 On July 6, 2020, Detectives located Mardeontae J. Lee (22) at his residence where he was arrested without incident. Lee was charged with 3 counts attempted first-degree murder, 1 count aggravated arson, 1 count contributing to the delinquency of a juvenile  and 1 count simple possession of marijuana.

On July 19, 2020, Kadrick Thompson (19) of Franklinton was arrested by Patrol Officers without incident on the charges of aggravated arson and principal to 3 counts of attempted first-degree murder. During the investigation, it was reportedly determined that Thompson had provided the accelerate to start the fire. Thompson remains in the parish jail with bond set at $200,500.00.

On June 20, 2020, Patrol Officers located the juvenile (16) at a location in Franklinton, the juvenile was interviewed by Investigations and reportedly confessed to his involvement in the crime.
at 7/21/2020 11:21:00 AM