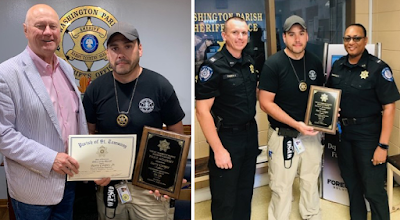 recently graduated from the Louisiana Police Officers Standards and Training Academy hosted by the St. Tammany Parish Sheriff’s Office. Deputy Cooper excelled in all aspects of the academy training, obtaining the highest academic average in his class.

Sgt. Cooper serves in the role of investigator in the jail. Not only does he investigate any incidents involving inmates or staff, but also he monitors the gathering of intelligence regarding criminal activity both inside and outside the jail.

“Sgt. Cooper is an outstanding employee,” stated Sheriff Randy Seal. “He is a proven corrections professional and exemplifies the best of the best. Congratulations, Sgt. Cooper, on your completion of the rigorous academy curriculum and your achievement in obtaining the highest academic average.”
at 6/18/2020 04:03:00 PM