Driver Missing After Crash On Interstate 10 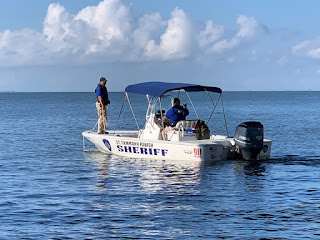 responded to an injury crash on Interstate 10 eastbound on the Twin Span bridge near mile marker 259 in St Tammany Parish. A driver that had exited their vehicle from a prior crash fell over the side rail of Interstate 10 into Lake Pontchartrain as a result of the impact.

The initial investigation led Troopers to determine that, 47-year-old Louis Picolo was eastbound on Interstate 10 in a Chevrolet Cruz when he rear end impacted a Dodge Pickup that was stopped due to a prior crash with a Mercedes Sedan. All of the occupants of the Dodge and Mercedes were standing on the shoulder of the Interstate 10 bridge at the time of the impact. The impact caused the driver of the Dodge, who was standing on the shoulder, to go over the bridge rail into the lake.

The identity of the missing driver is unconfirmed at this time. The St. Tammany Sheriff’s Office Marine Division as well as the U.S. Coast Guard are conducting a search of the area for the driver. Impairment is unknown and Picolo was not wearing his seat-belt at the time of the crash. As part of the ongoing investigation, a blood sample was taken from Picolo that will be submitted to the Louisiana State Police Crime Lab for scientific analysis. The crash is still under investigation and any charges will be forwarded to the St Tammany District Attorney’s Office.
at 6/05/2020 04:38:00 PM