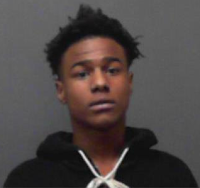 Hammond Police Department was dispatched to the 600 block of South Cherry Street in reference to a black male subject jumping a fence at a residence across the street.
Upon arrival in the area and after a foot pursuit, patrol and K9 officers, along with the street crimes unit and narcotics officers, located the suspect, Terrance Johnson (19) of Hammond, underneath a house.

Johnson was placed in custody and while searching him, officers found additional stolen property in his pockets from a burglary that had just occurred, which the resident was not even aware of yet. The property was returned to the owner.