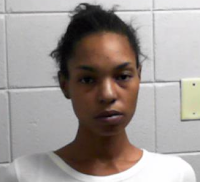 The arrest followed an investigation by the Bogalusa Police Department CID Division into reported allegations of child abuse. Detectives concluded that probable cause existed, and sought and obtained an arrest warrant for Colter-Spikes. She is accused of causing severe injury, a broken nose from blunt force trauma, to a six year old child.  Colter-Spikes was arrested without incident, and booked into the Bogalusa City Jail, pending a transfer to the Washington Parish Jail for housing.