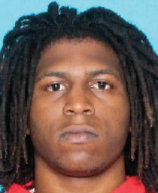 The Bureau of Alcohol, Tobacco, Firearms and Explosives (ATF) New Orleans Field Division today announced a reward of up to $2,500 for information leading to the location and arrest of ATF fugitive Demarquiez Devon Harris. Harris was a resident of Bogalusa, LA and is considered armed and dangerous.

Harris is described as a 24-year-old black male with black hair and brown eyes, standing 5 feet 9 inches tall and weighing approximately 145 pounds. He was indicted in September 2019 as part of federal indictments for narcotics and firearms offenses against suspected members of the Snatcha Gang operating in the Bogalusa, Louisiana area.

Harris has prior convictions for possession with intent to distribute marijuana, illegal use of dangerous weapons, resisting and battery of a police officer, battery of a correctional facility employee, and obstruction of justice.

Anyone with information about the whereabouts of Demarquiez Devon Harris should contact New Orleans Crimestoppers at 504-822-1111 or toll free at 1-877-903-STOP(7867). Tips may also be submitted to Crimestoppers through the crimestoppersgno smartphone app. All calls and tips will be kept confidential.

ATF, along with our law enforcement partners, is committed to ensuring our communities are safe and that those who commit violent crimes such as this are held accountable. For more information about ATF, visit www.atf.gov.