Three Tangipahoa Parish residents were arrested November 8, 2019 on narcotics charges at the parish 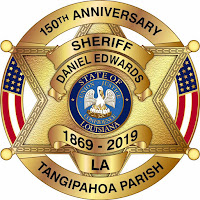 jail in Amite. The incident began around 4:00 p.m., as TPSO Narcotics Agents observed Matthew Cooper (37) of Independence and Antonio Darnell Sheridan (48) of Hammond displaying erratic behavior while sitting in a vehicle in the parish jail parking lot.

Upon making contact, Sheridan attempted to flee from agents on foot. Sheridan reportedly attempted to throw away a glass pipe, commonly used to consume methamphetamine, and a large clear plastic bag containing approximately (7) grams of methamphetamine. After a brief struggle, Sheridan was detained and the items recovered. Sheridan was charged with the introduction of contraband into a penal institute, possession with intent to distribute CDS II, possession of drug paraphernalia, and resisting an officer.

Matthew Cooper was detained at the vehicle and found to be possession of a small piece of paper containing approximately .5 grams of suspected methamphetamine. Cooper was charged with the introduction of contraband to a jail facility and possession of CDS II.

While outside the jail facility attempting to conclude the aforementioned investigation, agents observed Kristina Sharp (33) of Independence walking toward Sheridan’s parked vehicle. Due to Sharp being a known associate of Cooper, she was detained pending further investigations. Sharp’s purse was located inside of Sheridan's vehicle. The purse reportedly contained a glass pipe commonly used to consume marijuana and suspected marijuana. Sharp claimed the purse to be hers and was charged accordingly.