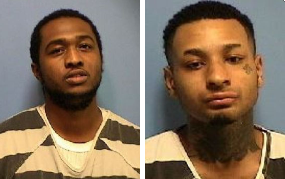 Jules Clinton Johnson  (30) of Slidell, and Tony Smith (31) of Slidell with second degree murder in the shooting death of a 43-year-old man earlier this year.

Johnson also was indicted with possession of a firearm or carrying a concealed weapon by a convicted felon. Both men are accused of shooting to death Melvin Webb outside a Slidell bar in the early morning hours of May 19, 2019.