Major Percy Knight with the Bogalusa Police Department reports that a May 24th residential burglary has been solved. The burglary was in the 600 block of Richmond Street and two flat screen television sets, a Direct TV box, assorted jewelry, and a Nikon camera were taken.
Bogalusa Detective Patrick Lyons received information and subsequently obtained a search warrant for a residence in the 1200 block of N. Royal Street where stolen property, drugs and money were located. Another search warrant was obtained for the residence next door where Det. Lyons and WPSO Det. Damion Mitchell located three semi-automatic pistols which were stolen. One of the pistols was stolen from Bogalusa and another from St. Tammany Parish.
In addition, Mitchell and Lyons located a AR-15 style rifle, 223 caliber with a high capacity with a 100 drum style magazine that was fully loaded, 4 push lawn mowers and 5 weed trimmers. Also an assortment of drugs and cash was seized.
Reginald Payne was charged with Simple Burglary and Possession of stolen property. Cedric Adams was charged with Illegal Possession of Stolen Things, Possession of Cocaine and Convicted Felon in Possession of Firearms.
Major Percy Knight would like to thank all the officers and agencies involved in the recovery of the property. Det. Patrick Lyons, The Bogalusa Police Department's Patrol Shift of A/Capt. Troy Tervalon, the Detective Division, Drug Task Force of the Washington Parish Sheriff's Department and the K-9 unit from Rayburn Correctional Center. 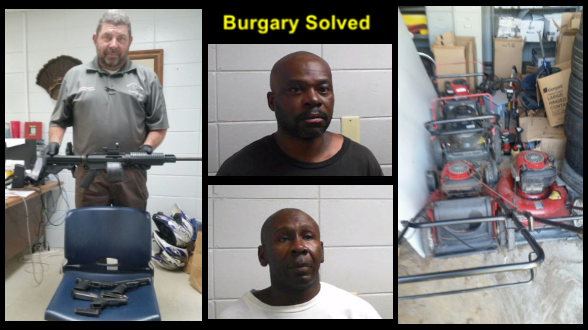