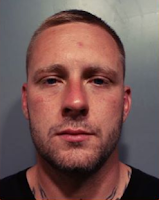 Slidell Police responded to a domestic disturbance on December 11 and found a female victim who appeared severely battered and with extreme bruising under her eyes and ligature marks around her neck. The vicim said her boyfriend, Christopher Wayne Dixon,wrapped a phone charging cord around her neck, threatened to kill her, and then began punching her in the face repeatedly.  During the attack Dixon ripped out the victim's earrings and bellybutton ring.  Dixon's mother witnessed part of the incident and began yelling at her son to stop.  The victim was relocated to a hospital where it was found that the victim suffered from significant injuries and broken bones.
When detectives located Dixon, he fled into a wooded area and was later found to be hiding inside his residence. He then fled through the rear door but was caught after a brief foot chase. Dixon admitted to the domestic abuse battery and stated he would do it again. He was charged with Second Degree Battery, Domestic Battery (2nd Offense), False Imprisonment, and Criminal Damage to Property.
Dixon had unrelated outstanding arrest warrants for Failure to Appear, Criminal Damage, and Misuse of Telephone Communication. He has a criminal history of arrests for crimes including Felony Hate Crime, Domestic Abuse Battery, 2nd Degree Battery, Aggravated Battery, Simple Battery, Aggravated Assault, Simple Assault, Aggravated Escape, Simple Escape, Simple Burglary, Unauthorized Entry Of An Inhabited Dwelling, Unauthorized Use Of A Movable, Simple Arson, Attempted Purse Snatching, Theft, Illegal Possession of Stolen Things, Battery On Police, Resisting An Officer, Flight from An Officer, Drug Violations, Traffic Violations, Probation Violations, Failure To Appear Warrants, Fugitive Warrants, and other criminal charges.
at 12/27/2016 04:35:00 PM