Arrest Made in Fatal Hit and Run in Slidell 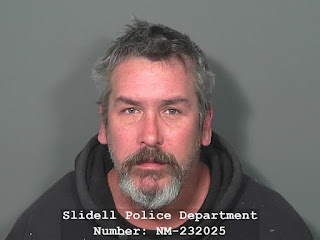 Thomas J. Otero, age 52 and of Slidell, has been arrested on the charges of Negligent Homicide and
Hit and Run in the death of Jason Milto, age 48 and of Slidell.

The Slidell Police Department began the investigation on Monday (February 15, 2021) after a body, identified as Jason Milto, was discovered in a ditch, along the E. I-10 Service Road near Katore Body & Automotive Center. Injuries to Milto’s body led investigators to determine that he was struck by a vehicle while walking along the side of the road.

It took investigators several days to view surveillance video, from numerous different businesses, in order to piece together the sequence of events that led up to the victim’s death. After analyzing crash debris left at the scene, and corroborating video surveillance footage, investigators focused their efforts on a late model white Ford F-150 pickup truck, as being the suspect’s vehicle. An off-duty Slidell Police detective spotted the Ford F-150 at a gas station near Indian Village Road.

Investigators determined that the victim was struck by Otero during the early evening hours of Sunday (February 14, 2021) and Otero did not stop to assist the victim, nor did he contact anyone to report the accident. It wasn’t until the next day (15 hours later) that the victim was found.

Slidell Police Chief Randy Fandal says, “The fact that Mr. Otero didn't stop, or at least call someone to help the victim, is beyond me. Mr. Otero will have to answer for his actions, or lack thereof. Maybe, just maybe, if aid was rendered to the victim, he could have survived, or at least had a fighting chance. We extend our thoughts and prayers to the victim's family during this difficult time.”

Otero was booked into the Slidell City Jail Friday (February 19, 2021) evening and then transferred to the St. Tammany Parish Jail.