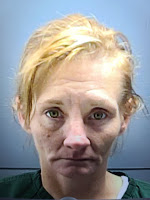 Tangipahoa Parish Sheriff Daniel Edwards reports the arrest of Bregette Manton, age 38 and a resident of Tangipahoa Parish, on the charges of Simple Burglary, Trespassing, Auto Theft (2 counts), and Failure to Appear (5 counts).

On December 8, 2020, a report was filed regarding a female trespassing on private property at a residence on Hwy. 16 east of Amite. The female was recorded by a surveillance camera and is accused of illegally entering the property through a secured gate and removing multiple items from behind a fence. The female then loaded those items into a green Ford F150 pick-up truck.

Later that day, TPSO detectives located Manton at her residence in Uneedus where she was taken into custody.