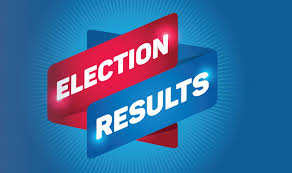 Yesterday's (December 5, 2020) General Election finalized the results of this most recent election
season. Complete but unofficial results show that