Disturbance 1. Tropical Storm Marco is forecast to approach the coast of Louisiana this afternoon, and then turn westward and move very close to the coast of Louisiana through Tuesday night. Maximum sustained winds have decreased to near 50 mph. Further weakening is expected, and Marco is forecast to become a tropical depression late on Tuesday and dissipate on Wednesday.

Disturbance 2. Tropical Storm Laura is moving west-northwest near 21 mph. On the forecast track, the center of Laura will move over the Caribbean Sea just offshore the southern coast of Cuba today, and move into the southeastern Gulf of Mexico by early Tuesday morning. Laura is then forecast to move over the central and northwestern Gulf of Mexico Tuesday night and Wednesday. Gradual strengthening is expected, and Laura is forecast to become a hurricane by early Tuesday. From late Wednesday into Friday, Laura is expected to produce rainfall of 5 to 10 inches, with isolated maximum amounts of 15 inches across portions of the west-central U.S. Gulf Coast near the Texas and Louisiana border north into portions of the lower Mississippi Valley. 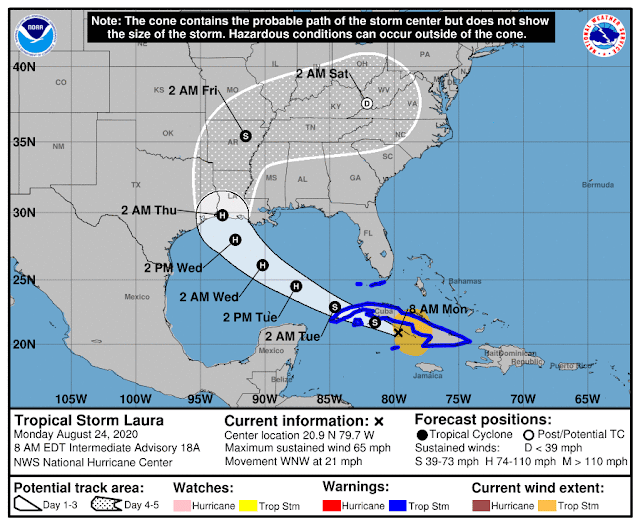