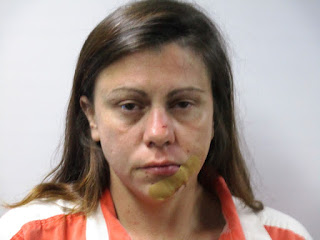 On Friday (May 8, 2020), Washington Parish Sheriff’s Office Sergeant Mike Thomas was dispatched to a rural area in the central part of the parish in response to an assault on an elderly man who had been attacked in his home by a younger woman after an argument turned violent. The victim had a back injury and Sgt. Thomas observed blood and signs of a struggle inside the house.

Sgt. Thomas was able to locate the aggressor and arrested Dana Deshay Westmoreland, age 34 and a resident of Ed Gerald Road. She was booked into the Washington Parish Jail on a charge of battery. Westmoreland remains in jail with her bond set at $2,500.

Westmoreland has one previous jail stay in Washington Parish. In June 2019, she was arrested and charged with simple battery with injury, battery on an officer with injury, four counts of resisting an officer with force or violence and three counts of battery of a correctional officer. She remained in jail for over two months on those charges.