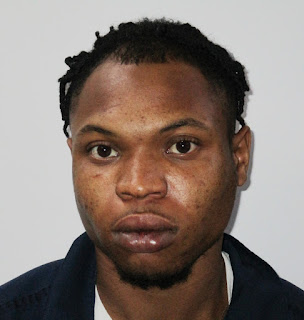 Dwayne Juwan Elzey, age 21 and a resident of northwest Washington Parish, was arrested on Mother's Day (Sunday, May 10th) by Washington Parish Sheriff’s Office patrol deputy Kyle Stogner and booked into the Washington Parish Jail on charges of domestic battery by strangulation, domestic abuse with child endangerment, resisting an officer with force or violence, resisting an officer by flight on foot, and two counts of failure to appear in court. He remains in jail with $7,500 bond, and must remain in jail pending a mandatory court appearance.

Deputy Stogner’s investigation indicated that Elzey assaulted a woman in the presence of her children. Elzey was handcuffed for safety as Sgt. Mike Thomas arrived on the scene to assist. As the two officers were arresting Elzey and placing him in the patrol vehicle, Elzey attempted to head butt Sgt. Thomas and then ran away from the officers who were able to subdue him with use of an electronic stun device. Elzey was evaluated by Northshore EMS and then transported to the jail.

“There is no rationale for domestic abuse,” stated Sheriff Randy Seal, “and in the presence of children makes it even worse. Thanks, Deputy Stogner and Sgt. Thomas for protecting this mother and putting her attacker in jail.”
at 5/11/2020 03:36:00 PM