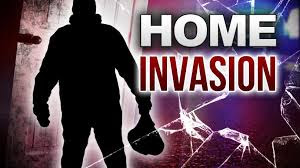 forced his way into a parish residence. A few minutes after midnight on January 13, a male subject, dressed in all black and wearing gloves and a ski mask over his face, forced his way into a residence on Highway 424 (in the community north of Thomas) and into the bedroom of the victim, a 74-year old woman who was watching five sleeping children at the time.

The intruder, who was armed with a pistol, demanded money from the victim. When she told him there was no money in the house, he threatened to kill her and took her late husband’s 12 gauge shotgun from a gun cabinet in the bedroom. As he was getting the shotgun, she attempted to flee the bedroom, at which time he struck her in the back of the head with the pistol, causing an injury which required medical treatment. At that time he fled the residence.

Crimestoppers is offering a reward in this case. Any person with information is asked to contact Crimestoppers anonymously at (504) 822-1111 or go online at www.crimestoppersgno.org to leave information. Tipsters should use the case number 2020010529.

Sheriff Seal stated. “If you know anything about this crime, please contact Crimestoppers. This criminal must be stopped before he does the same thing to another person. Help us identify him so we can locate and arrest him. He is obviously a person with low morals and no regard for human life. Let’s put him in jail where he belongs.”