Ashley Rodrigue, the State Fire Marshall's Office Public Affairs Director, today (January 15, 2020) provided additional information about a fire death that occurred in Mt. Hermon on the morning of January 13, 2020. Initially, the only information released was that there was a fire at the 36000 block of Hwy. 1055 in Mt. Hermon, a victim had been found and SFM deputies were on scene.

The State Fire Marshal's Office has not released the name of the deceased or the cause of death, stating “We do not identify victims as that is the role of the local Coroner's Office.” (Editor's note: The victim is presumed to be the resident at the Hwy. 1055 scene of the fire, Michael Gonzales.)

The fire department was called at 9:45 a.m. on the morning of January 13, 2020 after a social worker arrived to the camper to check on the occupant due to his health conditions and identified smoke in the air. Firefighters located a small, smoldering fire alongside the victim, which was extinguished.

State Fire Department investigators identified the interior damage as limited variations of minor to moderate heat and smoke damage. The victim was located between the kitchen counter and two recliners. The origin of the fire is believed to be where the victim's body was located. At this time, the exact cause of the fire remains undetermined; however, two electric heaters and a blow torch were found either beside, touching or very near the victim's body.

The investigation into the cause is ongoing at this time. An autopsy was conducted today and identification, as well as cause of death, is pending with the Washington Parish Coroner's Office. 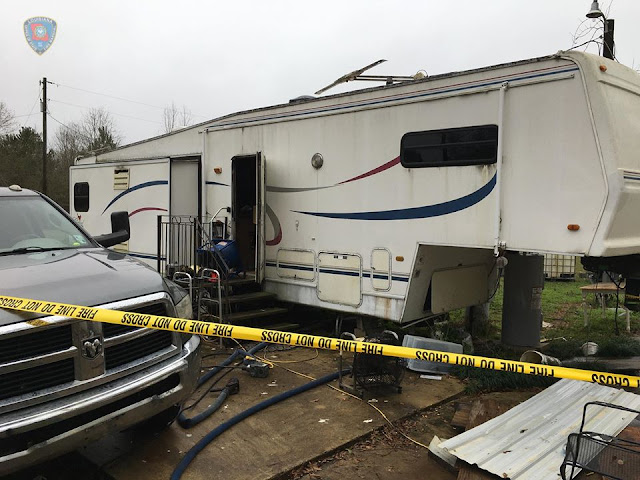