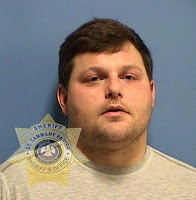 dispatched to the area of Beau Chene Drive and Oak Drive, in the Beau Chene subdivision in Mandeville in reference to a crash involving an SUV and bicycle travelling with two (2) juveniles.

The vehicle struck the juveniles who were riding together on a single bicycle. A 13-year-old female and a 6-year-old male were transported to a local-area hospital. The 13-year-old sustained non-life threatening injuries and the 6-year-old was airlifted to a Southshore hospital in critical condition.

In the early morning hours of Saturday (December 7, 2019), the STPSO was notified that an individual, later identified as Joel Evans Cairns (31) wished to surrender himself to deputies in reference to the hit and run crash.

Cairns, a Mandeville-area resident, was taken into custody without incident and booked into the St. Tammany Parish Jail on the charges of Felony Hit And Run (2 counts), Careless Operation, and Driving Under Suspension.