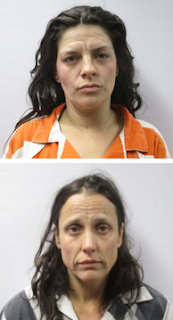 On Tuesday (November 5, 2019), the Franklinton Police Department received a complaint regarding a possible burglary at a residence on Main Street. When Officers arrived at the abandoned house, they observed a small SUV parked behind the home but were unable to  locate anyone in the residence or immediate area.

The vehicle, which was parked on private property, had containers with numerous items that appeared to have been taken from the residence. Officers called for a tow truck to remove the vehicle and secure the contents. Shortly after the tow truck arrived, a female, later identified as Ashley Wright (34) of Monticello Ave., New Orleans, appeared and stated that she had been using the SUV, which belonged to her mother. Wright reportedly gave several explanations as to why the vehicle was parked behind the house, but no explanation as to the items located inside the SUV.

Wright was transported to the Franklinton Police Department for questioning. Officers learned that another female had also been in the area and had walked into the wooded area behind the house. Officers continued to search the area and eventually made phone contact with Sara Katherine Hill (AKA: Kat Brooks) (43) of Folsom. Hill initially refused to come out of the woods, but after several hours she emerged and was taken to Riverside Medical Center for medical evaluation. Upon her release, Hill was transported to Franklinton Police Department by her family¸ and was interviewed regarding her connection to the burglary.

According to the FPD Press Release, both Wright and Hill admitted to taking several items from the residence and selling them online.

On November 6, 2019, Detectives contacted the St. Tammany Parish Sheriff’s Office and a search warrant was served on a residence near Folsom. Franklinton Police Department Officers along with St. Tammany Parish Sheriff’s Office Detectives worked over seven hours to recover thousands of stolen items. It is estimated that the value will exceed $100,000 in recovered property.

During the investigation, Hill (Kat Brooks) continuously alluded to the fact she was a movie producer and worked in the film industry. Detectives verified Hill’s claims. She further stated some of the items were used as movie props.

Wright and Hill were both charged with Burglary and Trespassing and turned over to the Washington Parish Jail. This investigation is ongoing.