In May of this year, Slidell Police issued an arrest warrant for 44-year-old, Riley “Rilo” Richardson 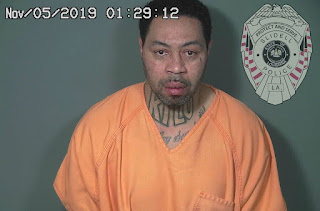 (Houston, TX), for being a key player in stealing over $100,000 in wheels from the Matt Bowers Chevrolet Dealership in Slidell, Louisiana.

“Rilo” is the last suspect Slidell Police is looking for in this case. Chief Randy Fandal says, “Several months, and hundreds of man hours later, our Slidell Police Department investigators brought down an elaborate, nationwide organized theft ring. Our message has been made VERY clear to these individuals, and anyone else who thinks they are going to prey on our businesses…don't come to Slidell, Louisiana, to commit your crimes. I told you we would come find you no matter where you were hiding, and I’ve held true to my promise. Multiple law enforcement agencies across Texas have piggybacked off of our investigation to ensure these individuals are brought to justice and held responsible for every single theft they have committed.“

Richardson was booked into the Slidell City Jail for felony Theft Over $100,000. Richardson was transported to the St. Tammany Parish Jail where a bond will be set.