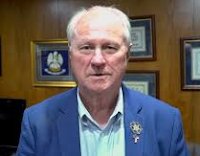 Washington Parish Sheriff Randy “Country” Seal went to the Registrar of Voters’ Office this morning and switched his party affiliation from Democrat to Republican.