Man Steals Fishing Poles - Only Thing He Caught Was a Charge

On Wednesday (October 2, 2019), Slidell Police were notified of a theft of several brand-new fishing 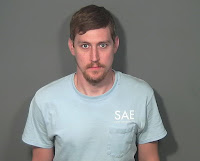 poles (valued at over $1000), taken from the back of a truck at Southside Café on Ponchartrain Drive. The poles were to be auctioned off to benefit the Wounded Warrior Project.

The suspect was captured on surveillance video, which enabled detectives to identify the suspect Jeffrey Effler (34) of Denham Springs. Effler was located in less than three hours at a house in Slidell, with the fishing poles. The only thing Effler caught was a charge!

Effler was booked into the Slidell City Jail with one count of Theft. The fishing poles will be returned to the rightful owner, and they will still be able to be auctioned off to benefit the Wounded Warrior Project.