Disturbance at Hospital Leads to Arrest 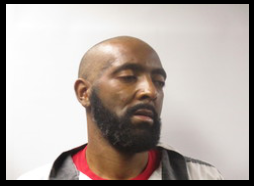 On October 5, 2019, Officers with the Franklinton Police Department responded to Riverside Medical Center to assist the Washington Parish Sheriff’s Office deputies with an individual who was combative and resisting. When Sgt. Jared Stubbs and Pfc. James Harper arrived, they observed Tony Robertson (37) fighting with a deputy and a civilian. Officers restrained Robertson and attempted to return him into the hospital for evaluation.

Robertson continued to violently resist, kicking officers and causing serious injury to one deputy which required medical treatment. Officers were able to gain control of Robertson and he was taken into the hospital for a mental evaluation.

Robertson was later medically cleared and released from the hospital. Robertson was arrested and charged with Battery on an Officer with Injury (Felony), Battery on a Police Officer (Misdemeanor), Disturbing the Peace/Drunkenness and Interference with Medical Treatment. Robertson remains in the Washington Parish Jail with bond set at $7500.