The Atlantic is Busy With Cyclones & Disturbances

We're in the peak of the season for weather disturbances and threats. We've been spared in our neck of the woods, so far. But threats remain! We check frequently during the day and will bring you relevant information as it is released. 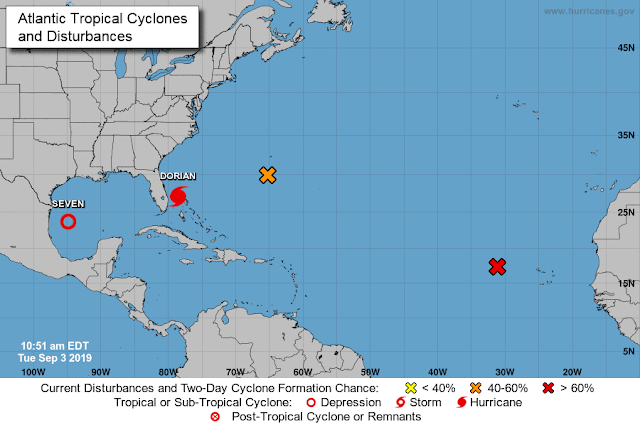 Currently, Hurricane Dorian is getting the most attention with its threat to the eastern seaboard from Florida northward. Dorian threatens with high winds and with the storm surges and flooding it will bring with it.

Tropical Depression Seven is in the western Gulf of Mexico and is forecast to reach the northeastern coast of Mexico in about 36 hours. It is expected to intensify into a tropical storm but dissipate by 72 hours.

Disturbance 2 is several hundred miles south of Bermuda. It is expected to move northward. Conditions are expected to make it less favorable for tropical cyclone formation.

Disturbance 1 is way out in the eastern Atlantic. There is a 90% chance of cyclone formation in 48 hours as it moves generally northwestward across the Atlantic.