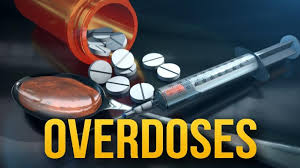 The first call was at 6:23 pm about a male who was unconscious and in need of medical attention at the Kiwanis Park. Ponchatoula Police Officers arrived as well as the Ponchatoula Fire Department and Acadian Ambulance. The male was administered a dose of Narcan, regained consciousness, and was transported to North Oaks Medical Center. Numerous drug paraphernalia was located at the scene. The female that was with the male subject was arrested for two Failure to Appear warrants and Possession of Drug Paraphernalia.

The second call was at  6:43 pm about a female who had possibly overdosed in the Walmart restroom. Ponchatoula Fire Department and Acadian were on scene administering aid to the unconscious female and then transported her to North Oaks Medical Center. The male that was accompanying her was seen throwing narcotics on the ground and was arrested for Possession of Schedule I Drugs and transported to the Tangipahoa Parish Jail.

The third call was at 7:52 pm about a female who overdosed. Ponchatoula Police Department officers, Ponchatoula Fire Department, and Acadian Ambulance were dispatched to President Hoover Street. The female was pronounced deceased by Acadian Personnel.