It is with great sadness that we announce the passing of Mandeville Police Captain, Vincent “Vinny” 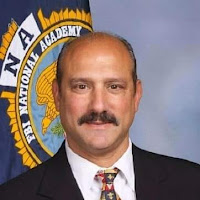 Captain Liberto leaves behind a loving wife and seven children. Several of his children are active law enforcement officers and military. Captain Liberto was 58 years old.

As mentioned earlier, any information in relation to the actual incident, resulting in Captain Liberto’s death, will be disseminated by the Louisiana State Police. There will be more information released about Captain Liberto, the man he was, and his services, at some point next week.

Thank you all for your respect, sympathy, and understanding during today’s incident. It will be a rough couple of weeks for the entire law enforcement community in the New Orleans Metro Area, especially the Mandeville Police Department.