The Kentwood Police Department responded (apparently yesterday, September 10, 2019) to an 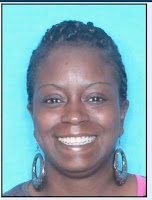 address on Vera B. Womack Drive, in reference to a domestic altercation, which resulted in a stabbing. Police determined that an altercation occurred between Talmadge D. Ennis and his wife, Kristen Martin-Ennis. Mrs. Martin-Ennis reportedly armed herself with a small kitchen knife and stabbed Mr. Ennis once in the upper chest/neck area. Mrs. Martin-Ennis fled the scene prior to officer's arrival.

As a result of his injuries, Mr. Ennis was airlifted to North Oaks Hospital, where he was treated and later released. Arrest warrants have been issued for Mrs. Martin-Ennis.

Anyone who has information on the whereabouts of Mrs. Martin-Ennis is urged to contact the Kentwood Police Department at (985) 229-6305.