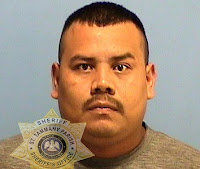 a traffic stop near Mandeville on Tuesday evening (September 24, 2019). The traffic stop was made by a member of the STPSO Highway Enforcement Unit on a vehicle that was headed westbound on I-12. The driver of the vehicle, Francisco S. Gonzalez (28), identified himself via his Mexico passport and admitted to not having a valid driver's license. He claimed to be traveling back to his residence in Texas after spending a few days in Tallahassee, Florida.

During the course of the traffic stop, a consensual search of the vehicle uncovered $29,000 of suspected drug proceeds bundled in plastic bags and concealed inside one of the vehicle's door panels. Gonzalez disavowed knowledge and ownership of the currency located inside the vehicle. The St. Tammany Parish Sheriff's Office seized the suspected drug proceeds and issued Gonzalez a traffic citation for Following Too Close and No Driver's License.

Gonzalez was identified as an illegal alien. United States Border Patrol agents took custody and arrested Gonzalez, who was later booked into the St. Tammany Parish Jail and is awaiting deportation from the United States.

“I commend our deputies who conducted this traffic stop, noticed something suspicious and ultimately took an individual, who was not only in our country illegally, but was engaging in suspected criminal activity, off our streets,” Sheriff Randy Smith said.

"The St. Tammany Parish deputies are so remarkably perceptive as they work to make our communities safer, and I once again herald their first-rate efforts in working alongside Border Patrol agents to stop bad people and bad things from harming American citizens, specifically this suspect who wasted little time in exploiting our crisis-ridden Southwest Border to re-enter the country illegally," said New Orleans Sector Chief Patrol Agent Gregory Bovino.