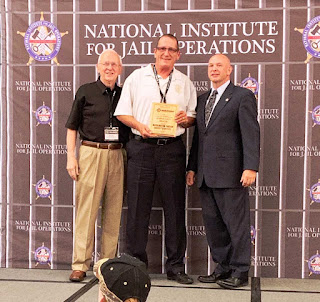 one in Scottsdale, Arizona, and the other in New Orleans. At the recent New Orleans conference, JailCon19 South, the Washington Parish Jail received the Detention Facility Innovation award in recognition of the many improvements which have been made in the jail during the administration of Sheriff Randy “Country” Seal. Chief of Corrections Jim Miller received the award on the behalf of Sheriff Seal and all jail employees.

In presenting the award, NIJO Executive Director Tate McCotter cited a long list of physical and administrative improvements which have occurred in the jail during Sheriff Seal’s administration. McCotter, who visited the jail several years ago, spoke of the poor condition of the facility at that time, humorously mentioning that the best thing he encountered was a slice of good Washington Parish watermelon. All of that was before Chief Jim Miller, and the dedicated jail staff, tackled the issues head-on and made significant improvements.

Chief Deputy Mike Haley spoke of the award. “During my decades long career, I have visited literally hundreds of jails and prisons throughout the nation. Only a handful were as bad as the Washington Parish Jail facility and administrative process that Sheriff Seal inherited in 2012. The drastic changes which have occurred are a prime example of what any Sheriff’s Office can do with an outdated facility. I congratulate Chief Miller and the entire jail staff for all of their hard work to earn this award.”

“What a pleasure it has been,” stated Sheriff Randy Seal, “for this Sheriff to have a jail staff with the foresight and initiative necessary to operate our jail in a constitutional manner. As with any jail operation, there are always ups and downs, but our dedicated jail staff has made certain we are on the right path. I am pleased to be their Sheriff and am so grateful for all of their accomplishments. The award is theirs and will be proudly displayed inside the jail.”