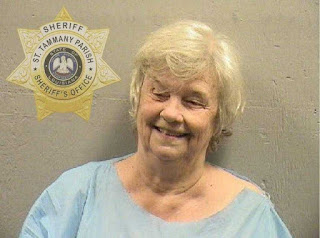 Attorney Keith Couture testified at trial that he was alone in a back office at his law firm on October 27, 2016, when he heard the door open. He walked to the front of the office and saw Currie sitting in a chair with latex gloves covering her hands, plastic grocery bags on her feet, and a white towel across her lap. Currie didn’t have an appointment, and when Couture asked her why she was there, she said she had come to kill him. Currie then moved the towel and raised the gun at Couture, but he was able to wrestle the weapon from her and call police.

St. Tammany Parish Sheriff’s deputies arrived and arrested Currie on the scene. Officers discovered that the gun not only was loaded but that Currie had four additional shotgun shells in her  undergarments and a box of additional ammunition in her car.

Currie testified in her own defense, admitting that she had gone to Couture’s office with her hands and feet covered and that she also had brought along a loaded shotgun, but she said she intended only to scare her former attorney—a claim rebutted by prosecutors.

“This was a cold-blooded, calculated attempted murder,” Assistant District Attorney Blair Alford said during her closing argument. “If it was not for the victim’s quick thinking to wrestle the gun away from her, he would be dead. We would not have heard from him but only be looking at his pictures.”

Couture had been Currie’s attorney during federal bankruptcy proceedings. Alford and Assistant District Attorney Angad S. Ghai also presented evidence that Couture may not have been the only attorney on Currie’s hit list. Just two hours before showing up at Couture’s office, Currie had been spotted in her red Camaro, parked in the woods outside the office of another attorney who had represented her for part of a three-decades-old legal dispute with the home owners’ association in her Mandeville neighborhood. An employee of the building where the law firm was located asked Currie to move her car from the woods to a visitor’s parking space, but she refused. She angrily gripped her steering wheel when she was told the attorney she wanted to see was not there and that police would be called. The worker noticed she was wearing blue latex gloves.