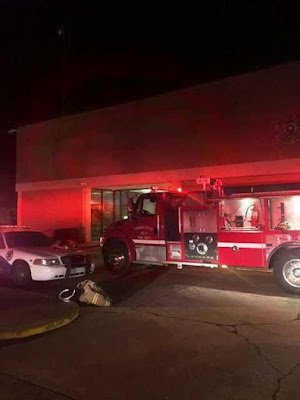 about midnight (July 21, 2019) forced the partial evacuation of thirty-four inmates to another jail.

Jail staff noticed smoke coming into the housing unit and immediately evacuated the thirty-four inmates housed there to a secure outdoor area. As smoke filled that one housing unit and spread to the hallways, threatening other housing units, the jail staff relocated all female inmates and other males in affected areas out of the jail to an outside fenced in area.

Immediately upon noticing the smoke, the jail staff sent out an alarm to the Franklinton Fire Department which responded along with firefighters from District 8 and District 9. All available Washington Parish Sheriff’s Office deputies and Franklinton Police Department officers responded to provide security for inmates who were moved from inside the jail to the jail yard. Other agencies which responded were Washington Parish Director of Public Works Ken Wheat and his staff, along with the Louisiana State Fire Marshal, and officers from Rayburn Correctional Center. Northshore EMS was on scene but no inmate required medical attention.

Rayburn Correctional Center dispatched a secure transport bus to the jail and the thirty-four inmates from the affected area of the jail were transported to another jail facility until their housing area is cleaned and ready for occupancy. All other inmates whose housing areas were not affected by the smoke were returned to their respective housing units.

Sheriff Randy Seal stated, “Our alert jail staff went into action immediately and removed inmates from harm’s way. Their quick decisive action was a key factor in making certain no inmates were harmed. I am so pleased with the excellent job they did. When I arrived on the scene after midnight, I was somewhat overwhelmed with the response from so many agencies which quickly responded to help out. Our parish firefighters, Washington Parish Sheriff’s Office deputies, Franklinton Police officers, Ken Wheat and his staff, the Louisiana State Fire Marshal’s Office, Northshore EMS paramedics and staff from Rayburn Correctional Center swarmed the jail complex and quickly resolved the problem. I am grateful to each of these agencies and their fine staffs. Washington Parish is blessed to have so many dedicated public servants who are willing to respond to any need that arises.