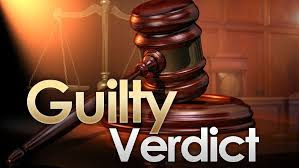 announce that a St. Tammany Parish jury found William “Billy” Jones, Jr. (46) guilty Thursday (May 23, 2019) of malfeasance in office and two counts of theft of a firearm.

“Mr. Jones held one of the most trusted positions in law enforcement, safeguarding the evidence seized during arrests,” Montgomery said. “This was a betrayal of that trust. But I congratulate the honest law enforcement officers and Assistant District Attorney Jessica Brewster, who uncovered this crime, and Assistant District Attorneys Angelina Valuri and Holly McGinness, who delivered justice.”

Brewster, who oversees the Assets and Forfeitures Division of the District Attorney’s Office, testified during the trial that a defense attorney in another case contacted her in November 2016 to inquire about $6,300 in cash that the Causeway Police had seized six months earlier. State law requires law enforcement agencies to notify the District Attorney’s Office within 10 days of a seizure. But Brewster said she had not been notified of that seizure, and when she attempted to contact Jones, he avoided her calls, emails, and text messages. After several unsuccessful attempts to reach Jones, Brewster contacted the Causeway Police, and the St. Tammany Parish Sheriff’s Office was brought in to investigate.

The investigation also uncovered missing cocaine. Investigators recorded a confession from Jones, but he testified during the trial that the confession was a lie.

Jones was also found to have stolen seized guns. Jones, a law enforcement officer for 25 years, was wearing his uniform when he sold the guns to a Washington Parish convenience store owner.

The jury deliberated for a little over an hour before finding Jones guilty. District Judge Reginald T. Badeaux set Jones’s sentencing date for June 13. Jones, who was fired from the Causeway Police Department, faces up to 5 years in prison for malfeasance in office and up to 10 years in prison for the firearms theft. Each count of the firearms theft carries a mandatory minimum of two years.

“We are pleased with the outcome of the trial and conviction of Billy Jones,” Causeway Police Chief Nick A. Congemi said. “Our officers displayed great professionalism in bringing one of their own to justice.”