The St. Tammany Parish Sheriff’s Office has arrested four juveniles in connection with a string of vehicle burglaries that occurred last month in the Madisonville area. Several unlocked vehicles were burglarized during the month of November in the subdivisions of Kathman Acres, Village at Bocage, Twin Pines and Fairfield Oaks. 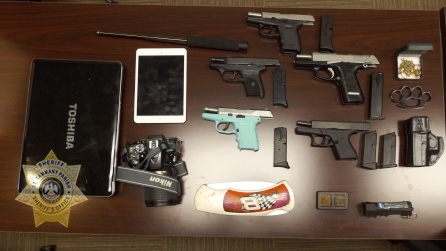 On December 6, 2018, detectives with the St. Tammany Parish Sheriff’s Office Investigations Division arrested three Madisonville-area juveniles in connection with those burglaries. The three juveniles, who are all under the age of 16, were booked into the Florida Parishes Juvenile Detention Center on burglary and firearms-related crimes. A fourth juvenile was arrested December 11, 2018, issued a summons, and released into the custody of a parent.

Detectives have recovered firearms, weapons, electronics, a camera and other various items that were stolen in connection with these burglaries.

The investigation is ongoing and investigators are still trying to locate victims and additional perpetrators. If you were a victim or have any information regarding these burglaries, please contact Detective Beau Long at 985-276-1333.