The Louisiana State Fire Marshal’s Office, in collaboration with the Bogalusa Police Department, 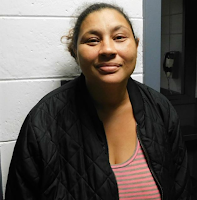 arrested Lisa Davis-Jefferson (43) of Bogalusa Tuesday (December 18, 2018) for setting the house she was evicted from on fire.

Monday afternoon (December 18, 2018), the Bogalusa Fire Department contacted the State Fire Marshall's Office to assist with determining the origin and cause of a residential structure fire in the 1000 block of South Dauphine Street. Investigators determined the fire started in the home’s living room and was intentionally set. Following an assessment and collection of evidence, and gathering several witness statements, an arrest warrant was issued for Davis-Jefferson, who had already been taken into custody by BPD for questioning in the case.

She was later booked into the Washington Parish Jail on one count of Simple Arson.

We invite our viewers to submit good
and positive news items to be published
on Mt. Hermon Web-TV's website.
The news could be related to a local hero,
a wedding, a birth, a unique experience,
an achievement,
or . . . well, you see what we are looking for.