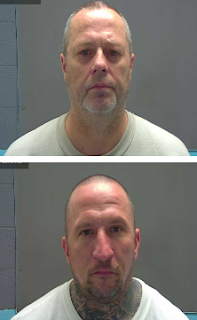 After a six-month burglary investigation, Tangipahoa Parish Sheriff Daniel Edwards is pleased to report that Pennsylvania residents James Dean Johns, Jr. (38) and  Louis John Alberti (54) are behind bars in Louisiana. The two were caught on surveillance video burglarizing several coin-operated machines in Tangipahoa Parish and are accused of doing the same throughout multiple states.
TPSO detectives joined forces with agencies in Louisiana, Mississippi, Georgia, and North Carolina and the two were taken into custody by the U.S. Marshal's Office in Pennsylvania in April and extradited to Tangipahoa Parish on May 14, 2018. Each are charged with twenty (20) counts of burglary in excess of $25,000. Other jurisdictions are in the process of obtaining warrants.
Sheriff Edwards describes them as professional traveling thieves who engaged in their criminal activities as a full-time job. The duo would obtain a rental car, commit the burglaries during midnight hours, and would rarely leave evidence behind. In one incident, they were caught on video breaking into five machines in three minutes flat.
However, they have been busted and are in jail with Alberti's bond set at $300,000 and Johns' bond set at $450,000.