A Recall Petition was filed on January 3, 2017 with the Secretary of State's office requesting an election to recall Bogalusa Mayor Wendy Perrette and Councilmen at Large Teddy Drummond and Doug Ritchie.  The petition designates Malcom Dmetritch Moses as Chairman and Keith Davon Merrill as Vice-Chairman.
Within 180 days after the petition was filed, at least a third of qualified electors in Bogalusa must sign the petition and the petition submitted to the Registrar of Voters. The Registrar of Voters would then validate the signatures. Washington Parish Registrar of Voters indicated there were approximately 6861 qualified electors in the fall 2016 election and, therefore, approximately 2287 validated signatures would be needed for the recall to go forward.  If the required numbers of signatures are validated, Strickland expects the recall would be on the ballot in the fall of 2017. According to the Clerk of Court's Office, cost to the City for the recall would be approximately $16,000 if it is the only item on the ballot; if other items are on the ballot, the cost should be around $4,000.
Why is this recall effort being made?  The Mayor and members of the Council have been increasingly criticized by a relatively small number of people.  Most recently, the appointment of Kendall Bullen as Bogalusa Police Chief by Mayor Perrette and confirmation by a majority of the Council came under attack.
Most issues are not new. The Mayor and Council have been struggling for some time with a dwindling tax base while having to address a need to maintain streets and other infrastructure. The Mayor has an “open door policy” and council members do their best to respond to citizens but the challenge of responding to critics and trying to satisfy everybody has led to two and three hour Council meetings. 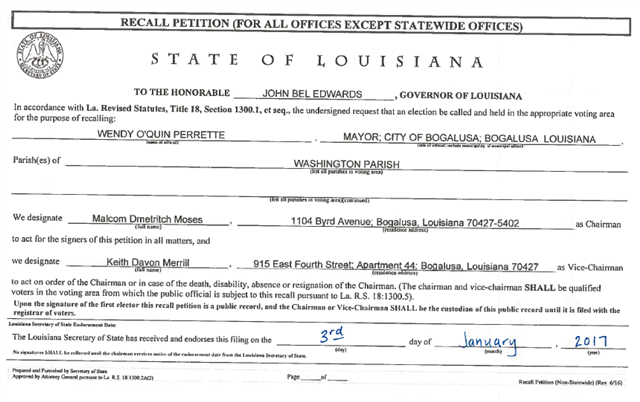 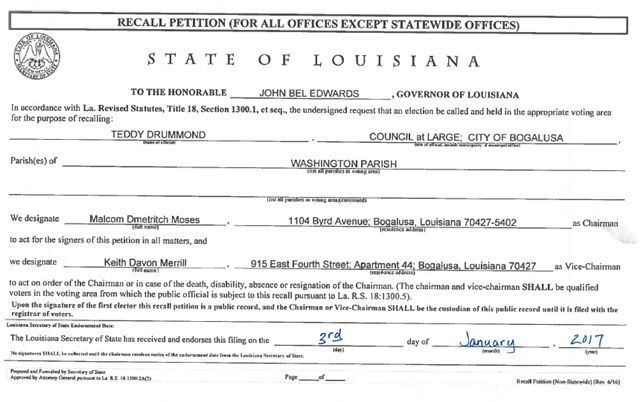 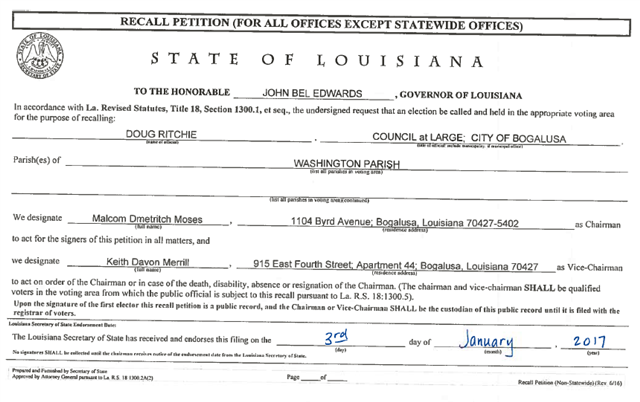